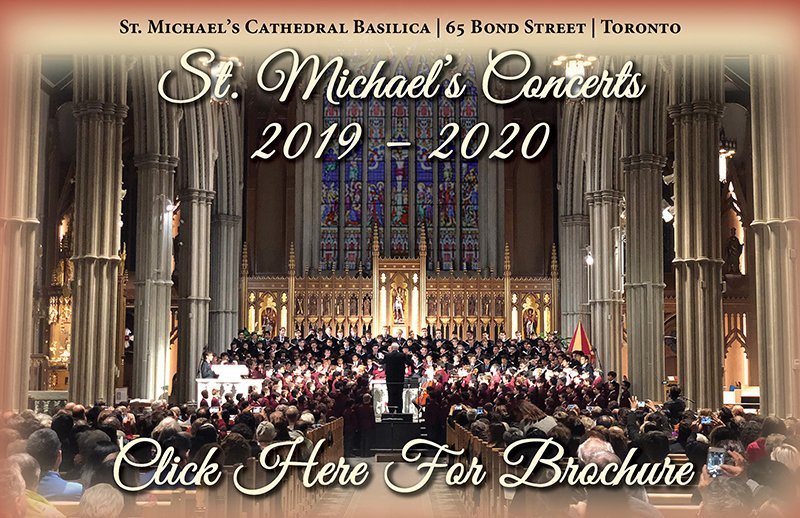 We welcome gifts of all levels in support of St. Michael’s Concerts. Donor names will be printed in the concert programs.

St. Michael’s Concerts and the Royal Canadian College of Organists are proud to present David Simon (SMCS 2011) in a recital featuring two significant works based on chant.

The annual Founder’s Day Concert honours the memory of Msgr. John Edward Ronan, who founded St. Michael’s Choir School in 1937. The 280 SMCS choristers perform varied works based on the Latin words “dona nobis pacem,” which appear as the last phrase of the Agnus dei section of the Mass and translate as “grant us peace.”

Lessons and Carols is a service of Christian worship celebrating the coming birth of Jesus at Christmas. It tells the story of the fall of humanity, the promise of the Messiah, and the birth of Jesus in short readings of scripture and in sacred song. St. Michael’s Choir School will offer seasonal choral music and lead all in favourite Advent hymns.

A program of reflective music on life’s endings and promise of the everlasting life to come. Mozart’s powerful and enduring Requiem is complemented by Gregorian Chant and the emotionally charged, yet restrained, Dead March from Handel’s oratorio, Saul.

The choirs of St. Michael’s Choir School – Elementary, Junior, Senior, Tenor/Bass, and Massed – present their final concert of the school year. Favourite repertoire from the past year blends with choral gems performed during the annual Spring Tour.