The Sacrament of Baptism is the first of our seven sacraments. It is through Baptism that the stain of original sin, and any other sin, is wiped away and we become new members of the Body of Christ and the Catholic Church. We extend a special welcome to you if you are trying to find out more about Baptism for yourself, or for your child.

If you are an adult who is seeking more information on how to become a member of the Catholic Church, please refer to The Rite of Christian Initiation of Adults (RCIA).
If you have recently become a parent, or your child is a little older, we want to assist you in raising your child in the faith.

Below are some of the frequently asked questions to help you understand the process of having your child baptized. If you have any further questions, please contact the parish office by email at [email protected].

Do I have to be a member of St. Michael’s Cathedral to have my baby baptized there?

The celebration of all our sacraments are community events and our community is our parish where we live. 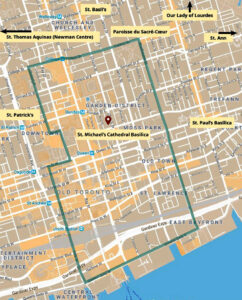 To begin the process of having your child baptized at the Cathedral, please send us a completed copy of the Baptismal Registration Form, along with the required documents via email to [email protected].

When is Baptism held?

Baptism takes place outside of Mass on the second and third Sunday of every month at 2:00 p.m. If one of these dates fall on a Feast Day, the Baptism will be scheduled to a different Sunday in the month.  For serious pastoral reasons, your child could be baptized at another time with the approval of the priest.

Are we required to attend meetings or classes?

Here at St. Michael’s Cathedral, we require that all parents meet with a parish priest or a Pastoral Associate. At the meeting a choice of dates will be offered for the baptismal preparation class followed by a date for the sacrament of Baptism. Once you have completed the class your baptism date will be set.  At this class, you will learn all about the sacrament, have your questions answered, and learn successful ways to incorporate the faith into your family life. This class lasts between 60-90 minutes. Parents and godparents are required to attend.  Classes are held twice a month.

Who can be a Godparent?

Every person being baptized, whether a child or an adult, must have a sponsor. The sponsors in Baptism have traditionally been called godparents. The minimum requirement is one sponsor, but usually when infants are baptized, they have two, one of each gender. Canon law permits only one godparent of each gender – a godmother and a godfather.

To be a sponsor, you must:
• Be at least 16 years or older
• Be fully initiated (received the Sacrament of Baptism, First Holy Communion, and Confirmation)
• Be an active Catholic and be registered at a Catholic parish
• Not be the parent of the one being baptized
• Show evidence of being a registered, active member of a parish, if needed

If you wish, along with the Catholic sponsor, one godparent can be a baptized Protestant Christian in good standing. They would be known as a Christian witness.

What if I am a single parent?

If you are not married (single parent), this situation, by itself, is not a sufficient reason to delay the Baptism of your child.

What if we did not marry in the Catholic Church?

If you are not married (single parent), this situation, by itself, is not a sufficient reason to delay the Baptism of your child.

If you are living together, or were married in another denomination, or civilly, this is an opportunity to “bless” your marriage in the Church. During your baptismal interview this can be further discussed. Regardless, the responsibility is yours to raise the child according to the faith, a faith that is best imparted by fully living the teachings of the Church.

How much does it cost?

There is no cost to have your child baptized. Donations made to the Church are always appreciated. It is acceptable to show your appreciation to the Church with an honorarium. This should always be according to your means. The suggested honorarium is $50.

A copy of this completed document must be sent to the Cathedral office. See below.

At least one (1) parent needs to be a baptized Catholic to baptize their child into the faith. We require a copy of their certificate of baptism (one or both parents).

We will require a copy of the birth certificate of the child to be baptized.

To begin the process of having your child baptized at the Cathedral, please send us a completed copy of the Baptismal Registration Form, along with the required documents via email to [email protected].