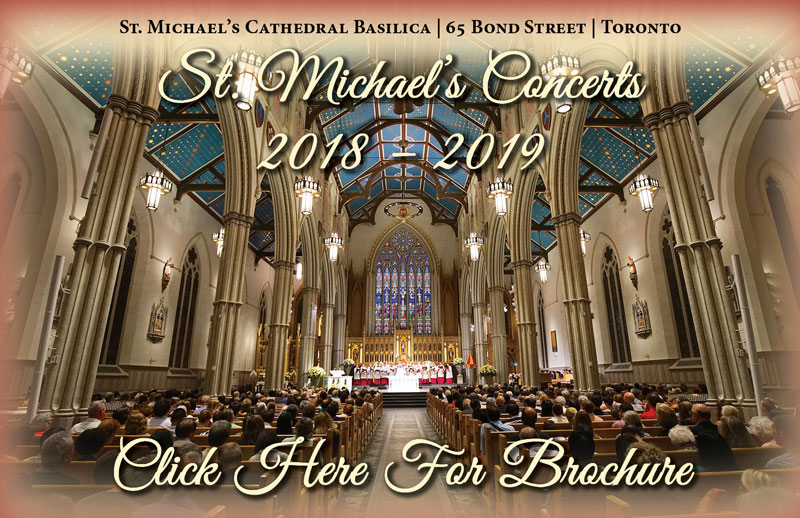 We welcome gifts of all levels in support of St. Michael’s Concerts.
Donor names will be printed in each of the concert programs.

On this day – All Souls’ Day – Catholics commemorate the faithful departed. SMCS performs the sublime setting of the pre-Vatican II Requiem or Funeral Mass by Gabriel Fauré (1845-1924) with orchestral accompaniment. Also on the program, works by John Rutter and Arvo Pärt’s De Profundis, a setting of Psalm 130, “Out of the depths, I cry to you O Lord”.

Lessons and Carols is a service of Christian worship celebrating the coming birth of Jesus at Christmas. It tells the story of the fall of humanity, the promise of the Messiah, and the birth of Jesus in short readings of scripture and in sacred song. St. Michael’s Choir School will offer seasonal choral music and lead all in favourite Advent hymns.

Since his success at the CIOC in Montreal in 2017, Alcee Chriss has been in great demand as a recitalist throughout North America. One of the world’s most prestigious competitions for organists, the CIOC welcomes competitors from all over the world. Chriss makes his Toronto debut with this solo recital on the Cathedral Basilica’s new 76 rank Casavant pipe organ.

A program of reflective music for the Lenten journey. Bach’s venerable motet for double-choir Komm, Jesu, Komm is paired with the Canadian premiere of Richard Burchard’s The Seven Last Words of Christ for choir and string orchestra.

The choirs of St. Michael’s Choir School – Elementary, Junior, Senior, Tenor/Bass, and Massed – present their final concert of the school year. Favourite repertoire from the past year blends with choral gems performed during the annual Spring Tour.